The Final Version of the Sedona Principles, Third Edition, Is Now Available

After a multi-year drafting and revision process, the Sedona Conference has now released the final version of the Third Edition of its influential Sedona Principles for eDiscovery

Last week, the Sedona Conference released the long-awaited final version of The Sedona Principles, Third Edition: Best Practices, Recommendations & Principles for Addressing Electronic Document Production. Reflecting years of debate and revision by the members of the Sedona Conference Working Group on Electronic Document Retention and Production (“WG1”), as well as a decade’s worth of case law, rule revisions, and technological evolution since the last edition, the Third Edition will be a valuable and influential resource for all those participating in eDiscovery in the coming years.

History of the Principles

WG1 first met to begin discussing best practices for eDiscovery in October 2002, and “[w]hile still in draft form, the First Edition influenced the development of the law and was cited in the landmark case of Zubulake v. UBS Warburg, 229 F.R.D. 422, 440 (S.D.N.Y. 2004).”  The completed First Edition of the Principles was published in January 2004, followed by annotated versions adding recent case law in June 2004 and July 2005.

In December 2006, changes to the Federal Rules of Civil Procedure directly addressing electronically-stored information (“ESI”) became effective, necessitating a new edition of the Principles.  In June 2007, the Second Edition of the Principles was published, and in July 2008, the Sedona Conference’s equally influential Cooperation Proclamation was released as a corollary to the Principles and other Sedona publications.

Context for the New Edition

As the introduction to the Third Edition points out, the last edition of the Principles was released the same month the first iPhone became available.  The decade since has been one of dizzying technological and cultural change, with storage and data volumes both continuing their exponential growth, and smartphones, cloud services, and social media reshaping the landscape beneath our feet.  eDiscovery tools and judicial expectations evolved as well, leading to new options and best practices.

Initial work towards a Third Edition actually began in 2010, but consensus could not be reached regarding the proposed changes, and eventually, that drafting attempt was set aside in favor of a new drafting team and attempt begun in 2013.  During the years of that development process, new revisions to the Federal Rules of Civil Procedure affecting eDiscovery became effective in December 2015, necessitating further revisions.  Throughout the process, strong differences of opinion between those primarily representing producing parties and those primarily representing requesting parties continued to make reaching consensus a challenge.

Like the previous editions, the Third Edition of the Principles is built around fourteen concise principles that together cover each aspect of ESI discovery, followed by in-depth commentary on each to illustrate how it is intended to work in practice and to provide citations to relevant cases and sources.  The following chart from the Third Edition breaks down the topics covered, the Principles that cover them, and the relevant Rules: 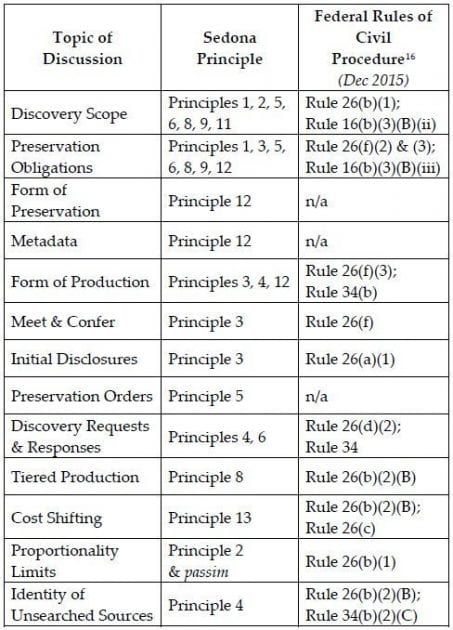 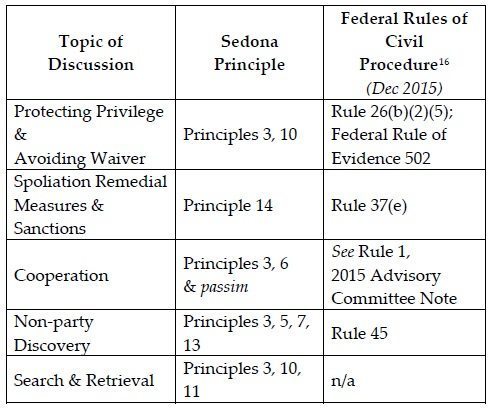 The Principles’ emphasis on the importance of cooperation and communication throughout the discovery process also remains unchanged.

What’s Changed in this Edition

Much of what’s changed in the Third Edition is the commentary on each principle, which has been updated to reflect the rule changes, new cases, new technology, and new views of best practices since the last edition.  In particular, the new edition reflects the increased emphasis placed on proportionality in the December 2015 amendments to the Federal Rules of Civil Procedure.

The most significant changes made to the Principles themselves are:

Because You Need to Know: Monthly News Round-Up for October 2017

In addition to all of the industry news items on which we have already touched, 2018 brought the usual collection of notable cases. In particular this year, there were interesting cases on spoliation, proportionality, keyword searches, and TAR. Below we review a sampling of the most interesting cases from those four topical areas.

In this series, we will review some of the biggest developments and most interesting cases from across 2019, including: data privacy developments, continued source proliferation, state rule changes, useful new publications from Sedona and others, and more than two-dozen new cases discussing a range of eDiscovery issues. We begin, in this Part, with a review of 2019 news to know.